Last July, I decided I wanted to go to Death Valley National Park.  Of course, I wasn't going to go in the summer where the temperature is over 100.  I looked on recreation.gov and found that they were taking reservations for campsites in January.  This would be a perfect little weekend getaway before starting my final semester at NAU.  I booked two nights in a tent-only campsite in Furnace Creek.  Now, there are several other campsites within the park, but I do not like doing the whole "first come, first serve", especially on "Brandon's time" (aka, later than I want).  On recreation.gov, most campgrounds have an interactive map of the site.  In addition, some campsites have pictures.  What I loved about the drive-in tent only spots were the trees!  I wasn't sure how hot it was going to be, so I picked a spot with the most shade.
We left Flagstaff on Friday around 11am.  We were in no rush to get there since there wasn't a gate to the campground. (Tip: Always check to see if there is a gate.  While in Utah last summer, the campground gate closed at 10pm).  Death Valley is also only a 5.5 hour drive, and we were going back a timezone.  We finally headed as far West on I-40-- all the way to Kingman.  We stopped at a Mobile gas station to use the restrooms.  However, this wasn't no ordinary Mobile Gas Station; this gas station had a small dog park!  We let Kodak run around for a little bit.  There was another dog that came by.  Of course, we told Kodak that we didn't drive 2 hours for this little thing, and that we had to keep on going. 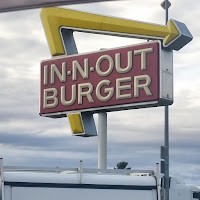 About one hour from Kingman is the Nevada Border and also Hoover Dam.  I've heard my grandma talk about this location, and since we were passing through, I figured we just take a small detour.  I was surprised on the amount of security there. We drove all the way to a parking lot on the Arizona side of the dam.  I'm not going to lie, I really wanted to check out the bridge walk, but I knew that we didn't have enough time, and that someone in our party is terrified of heights (Kodak).
The Hoover Dam isn't too dog friendly.  In fact, dogs aren't allowed on the dam at all.  Brandon and I walked around, grabbed a geocache, and made our way back to the freeway.  Overall, it was a pretty interesting place, and I would love to check out the Dam Tour next time when we don't have Kodak with us.
Next stop: Las Vegas!  Okay, this was only for lunch.  We packed food with us, but wanted to save it for when we were in the park.  Since I was driving, I requested In-N-Out.  I've only had this food once, and it was actually last January when I first had their food.  Brandon ran in and ordered, and we ate in the parking lot.  Once we were refueled, we switched places.  Brandon went to start the car, when we realized I left the engine on.....whoops!  Brandon asked a truck that was parked two spots down if he had any jumper cables.  The nice guy did and helped us jump the car.  At this moment, Brandon and I decided that we need to have a set with us in future emergencies. (Update: We now have a set with us!). 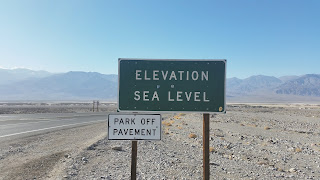 After that small little fiasco, we were finally back on our way.  Next stop: Pahrump!
The drive wasn't too bad.  There was a little traffic (people not going the speed limit), but we made it on time.  We decided to top off in Pahrump, even though we had about half a tank.  I knew we were going to do a lot of driving within the Park, but wasn't sure how much the gas would be.
Update:  Gas in Pahrump was $2.19.  Gas in Furnace Creek inside Death Valley was $3.79!
Because we were in Pacific Time, the sun sets at 5pm.  We got to our campsite around 5:40pm and set up camp.  We had a fire, and Brandon made himself a brat.  We just sat and chilled around the fire.  We went to sleep around 9pm. Though we went to sleep early, we woke up several times throughout the night because of the wind.  The wind was so loud and strong that it shook the tent!

The next day, I woke up around 8:30am (hey, you get to sleep in a little when you're on vacation).  I walked Kodak around the campground, woke Brandon up, and we were off to the Visitor's Center.  We picked up a map and got an idea what we were doing today.  I had several geocaches saved on my phone, we were also trying to get enough to pick up our #3000 cache on the trip!

Our first stop was Badwater Basin-- the lowest point in North America.  It was pretty cool to see, and we just walked out a little since we had Kodak.  We also went to almost every point heading back North to Furance Creek.  We actually hiked Natural Bridge and checked out Devil's Golf Course.
I wanted to see Zabriskie Point, so we headed around two miles East to check that out.  Once again, dogs weren't allowed, so we took turns checking it out.  This was probably my favorite sight during the whole trip.  Next time I'm here, I would like to hike the Badlands.
We made lunch and examined what we wanted to do next.  We checked out some of more not-so-popular sights like the Salt Flats with the pupfish, and the Death Valley Borates.   We made ourselves all the way up to Mesquite Sand Dunes.  We had fun here and let Kodak run in the sand.  Once we were down, we noticed that we had around 40 minutes left of daylight.  We were pretty exhausted being in the sun all day that we decided to head back to camp and cook dinner.

We had another fire and made the remaining brats and smores.  Brandon read some of his book while I just relaxed and enjoyed the moment.  That night, the wind was not as bad as the night before.  I had a pretty good night's rest.

Sunday morning, we ate breakfast and broke down camp.  We chatted to the young couple that was next to us and gave them recommendations on what they should do.  I knew we needed to get back home, so we stopped back at the Visitor's Center to grab some souvenirs.  Our last sight at the park was Dante's View.
This was a pretty interesting part in the park. You drive around 30 minutes and gain around 4000ft in elevation.  I watched the temperature from when we turned off the road to the parking lot at the very top.  The temperature began at 65 and dropped all the way to 41! At Dante's View, you are overlooking the Badwater Basin.  It was crazy to see the landscape at a different elevation.  We made lunch, and then decided to make our way back to Arizona.

We didn't make many stops on our way back.  We did, however, stop at Seven Magic Mountains which is a temporary art piece just outside of Las Vegas.  It was very crowded but still really interesting.  It was here that we finally grabbed our #3,000 geocache!

Death Valley National Park is a huge park.  I wish we had one more day to explore the Western part of the Park.  The northern part with Scotty's Castle is currently closed due to historic flooding.  I read in the Visitor's Center that it probably won't open back up until 2019.  I will definitely like to go back to this park in the future.
Death Valley is also filled with lots of Earthcaches and Virtuals.  During our trip, we managed to grab 15 within the park.

Exploring the parks and camping always makes me excited for my next trip.  After some work and school, I'll be ready for another vacation.
Posted by Unknown at 8:58 AM No comments: