After a great two days in Prague, we caught our bus to Bratislava, Slovakia, which is a small town that borders Austria and Hungary.  When we arrived at the Bus Station in Bratislava (around 1pm), Brandon and I walked to a nearby park to relax for about 30 minutes until it was time to check into our Airbnb.  The park was very nice-- the weather was great, the trees were blooming, and locals were sitting on benches reading books or chatting with a neighbor.  We eventually left and made our way to the Blue Church where the Airbnb was near.  We found the flat and went inside the building.  We missed what flat number it was, so we had to ring the door again.  We finally made it to the flat where we were greeted by Radka, a friend of the Airbnb host.  The host that we were staying with was ill, so we were going to have the flat with ourselves.  Unfortunately, this meant that we wouldn't have a personal tour with the host-- something the host originally suggested since she's a historian.  Brandon and I set our stuff down, and Radka told us that she was still cleaning and doing laundry from the previous guest.  We asked her where a good place to eat would be, and she suggested a new, hip cafe that was only a few blocks away.  Radka also gave us suggestions like where to get the best ice cream and where the secret staircase for the castle was located.  We told her thanks and went on our way to the cafe.

The cafe, U Kubistu, was nice and cozy.  We were running out of Euros, so we only had a set amount that we could spend.  The cafe had complimentary water, which is something you do not see a whole lot in Europe.  I ordered the chicken breast with sage (or it might have been basil) and apples.  Brandon ordered the Boar dish.  The food was delicious and healthy, though a little on the pricey end.  Brandon's boar was sooooo good.  It was tender and juicy.  We had our meal, paid, then went back to the Airbnb where we found a homemade guide book that the host created.  The book (more like folder) had suggestions on where to go and best places to eat like a local.  I found a free walking tour for the next day since our personal tour was cancelled.  Since the weather was so nice, and we had plenty of daylight left, Brandon and I went to the Danube and walked on the boardwalk.

The weather was perfect.  The walk was very nice, and we saw the three different bridges.  We had the directions on where to find the hidden staircase, but was unsure since there was a lot of construction. Brandon saw a staircase in the distance on the other side of the street, so we walked across and went up the steps.  Then, the stairs turned into steel, which was what we were looking for!  We climbed up the steps, and boy were there a lot of them.  At the top, it put us out right by the castle.  We had to go down the hill, and then we were there!  We took a lot of photos and walked around.  The views from the castle were awesome.  You can see the other side of the city that sits across the river, and to the right, you can see wind turbines, which I think were in Austria.  Of course, we found the oldest geocache in the country at the castle.  After we were done walking around, we went down the hill towards the old town.

We walked all around the old town looking for a cheap place to eat.  We stopped at this pizza place, but of course, the people in front of us ordered all of the pizza that we wanted.  So we walked out and explored the old town some more.  We eventually came across this street food bistro where the line was out the door.  We decided to eat there since we were both hungry, but not starving.  We one a cone of fries and a meat in a cone.  The food was really, really good.  After we filled out bellies, we went to the Lidl to pick up some snacks.  The Lidl was small, and I picked up some granola/fruit bars.  Brandon picked up some cookies and a loaf of raisin bread.

We finally went back to the Airbnb and relaxed.  We watched some tv and fell asleep.

We went to the old town again to meet people for the free English tour of Bratislava.  There were about 25 people who participated in the tour.  They were from all over the world: London, Australia, Germany, and some others that were from the States.  The tour was nice since we walked all over the old town and new town looking at the statues and learning history about them.  Most of the stuff that we saw, we already saw the night before.  After the 2 hour walking tour, Brandon, myself, and two guys from Germany went to this small restaurant called Verne to get some Bryndzove Halusky.  This is the national dish of Slovakia which is common to eat at bars; this dish is sheep cheese with bacon and soft noodles.  I thought it was good for 5 euros, but Brandon said he couldn't eat the whole plate of it.  After we ate our lunch, we walked on over to get dessert at Koun, which was suppose to be one of the best ice cream places in Europe.  I got 1 scoop of marzipan and 1 scoop of panna cotta. The ice cream was good, but I think it was over hyped.  The ice cream in Prague was a lot better.  After we ate our ice cream, we split ways with the German guys.  We went back to the flat and got what we needed for our geocaching event, which was held at the park that we went to the day before. 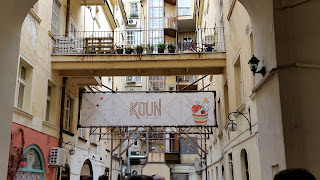 The geocaching event was nice.  We had a good turn out-- about 15 local geocachers attended.  We chatted about the States and Bratislava, and geocaching.  After about 45 minutes, we went back to the flat to relax for a little bit. 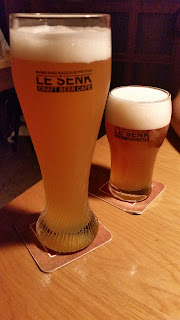 We decided to walk more around downtown to see if there was anything that we missed.  When we were finished, we went to Le Senk Craft Beer Cafe.  We weren't very hungry, so we ordered a small plate of wings and fries.  I got a hefeweizen beer, and Brandon ended up getting 2 or 3 IPAs.  This was the best beer that we had for the whole trip.  The cafe was really neat -- something you would see in Flagstaff.  After we were done, we went back to the Airbnb to get some rest before heading back to Budapest to catch our flight.

Overall, I enjoyed Bratislava.  I'm not sure if I would visit the city again because it is so small.  If I go back to Slovakia,  I would like to go to a smaller town.
Posted by Unknown at 12:22 PM