We woke up bright at early and left our B&B at 6am and drove 5 minutes to grab the Beverly geocache.  Once again, we were planning on grabbing some geocaching highlights, and Beverly was an absolute must!  As I mentioned in the previous post, Geocaching was created in May 2000, and there were only a handful of geocaches published during the month, not to mention that there are only a few still active today!  May 2000 is like a unicorn.  One of the most popular May 2000 geocache is Mingo, which is in Mingo, Kansas.  It is the oldest still active geocache alive, and Beverly isn't that far behind.  There is also one in Oregon as well as New York.

Since Beverly is found often, we had a good idea that it would be an easy find.  We parked at the park's lot and quickly found the trail.  We continued to follow the path until the GPS pointed off the trail.  We searched around for a "geo-trail" (a trail made by geocachers due to high traffic), and followed it to the ammo can!  Once again, it's not too special, just an ammo can in the woods; however, we now have the May 2000 block in our grid filled it....yay!

We walked back to the car and began our drive to South Dakota! 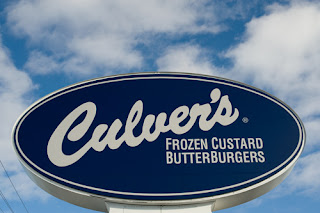 After paying some tolls and avoiding rush hour, we finally made it to Wisconsin!  We found a couple of geocaches there and drove on some nice country roads that took us past some dairy farms.  The weather felt great and the sun was out!  We decided to roll down the windows and PEW-EW!  The nice smell of
cow dung!  During our time in Wisconsin, we stopped at Castle Rock, which was a very interesting geological formation.  Afterwards, we stopped for some lunch at a chain called Culver's.  It was your basic fast-food joint, but claimed to have its dairy products made by local farms.  It was still delicious!  I had a single burger and some Wisconsin cheese curds followed with a root beer float (with homemade rootbeer and frozen custard).  I felt like a cow, ha, but it was so good! 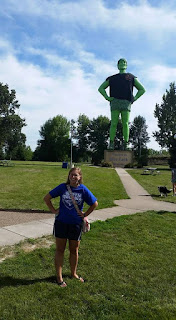 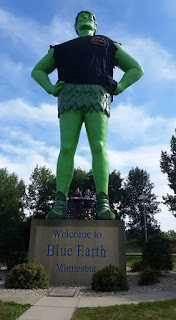 Our time in Wisconsin came to an end when we approached Minnesota.  It was a pretty easy drive despite the construction, but it wasn't too bad.  While passing through, we stopped in Blue Earth and said hello to the Jolly Green Giant!  We would have loved to stay longer, but we wanted to get to Sioux Falls before the sun set.

We eventually arrived in South Dakota and went straight to the Falls Park.  Here, the falls are displayed for you to walk around and explore the Falls' history.  We spent almost two hours at the park, which once again felt good after sitting all day.  The falls were gorgeous, and the weather wasn't bad either. 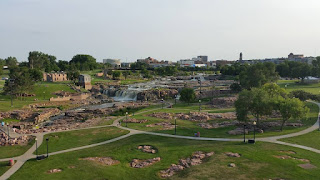 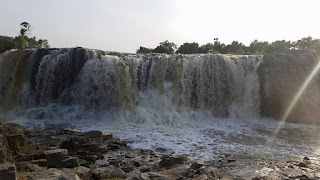 Once we soaked in the beauty, we drove through town and stopped at a pita joint.  It was like Subway, but everything was suppose to be healthy and made into a pita.  It definitely hit the spot, then we drove over to the AirBnB that we were staying in. 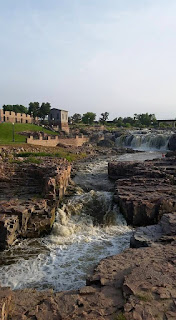 We stayed at a modern home only minutes away from the Falls.  Valarie was our host, and she was also very warm and welcoming.  Her and her roommates made a bonfire for us, and we sat around and chatted until 11pm.  The room that we stayed in was super nice too.  She provided us with organic snacks, wine, and toiletries.  Unfortunately, she left for work at 5am, so we didn't spend a whole lot of time with her, but this AirBnB stuff is pretty awesome.  I don't think I want to stay in a hotel again! 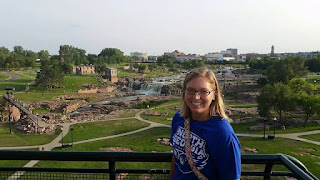