We left our B&B around 7am and drove over to where South Dakota, Iowa, and Minnesota meet.  This was my first time being in three places at one time.  After we took some photos, we drove on down to Sioux City, Iowa to grab some geocaches.  We first stopped at Chief War Eagle's memorial to get some information for a virtual geocache.  Once we were finished there, we drove on down to Nebraska!

First stop was Omaha, Nebraska to get a few geocaches.  We stopped at the Labor monument by the Missouri River.  Next, we stopped at Creighton University to get a webcam geocache.  We were starving for lunch by now, and tried to find somewhere local to eat.  Traffic was terrible downtown, so we got back on the interstate and got off a few exits down.  We ate at this chain called "Taco Johns" which was pretty good. 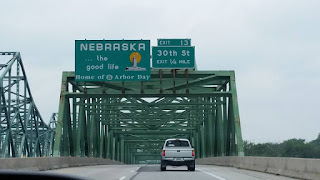 Once we were full, we swung over to Lincoln and picked up another geocache.  We once again were staying at an AirBNB and wanted to get there around 7:30.  We took our time on the road and stopped at several rest areas to stretch and relax.  The speed limit was 80mph and traffic wasn't bad.  We finally arrived in North Platte and grabbed some bratwurst to cook at the B&B.  Now, you're probably wondering why we decided to stop in the middle of nowhere, Nebraska.  Well, we didn't want to drive ALL day, and this was smack dabbed in the middle of the state.  Also, the next county over changed time to MST.

We arrived at the B&B, and Muriel, our host, walked outside to greet us.  She was a little older and was wearing a homemade dress.  I quickly asked what I got myself into, but when we walked inside, I quickly realized the family wasn't all religious or old-school.  Our room was nice and cozy along with the guest bath.  We heated up our brats on the grill since they had just finished cooking on it.  We were also offered some potatoes and local-grown corn on the cob, which was amazing!

After dinner, they offered us a beer and we sat and talked.  They have been hosting for several years and had people from all over the world stay with them.  Mark told us to stop at this huge Liquor store in Colorado and to keep our eye out for Odell beer.

After a long day of driving, and especially after the last 3 hours in nothing but corn fields, it was nice to relax in a cozy house.