After a great night's rest in the middle-of-nowhere, Nebraska, we made our way to Cheyenne, Wyoming.  Now, we could have just went straight to Denver, but we wanted to stop at this frontier town since we weren't that far away.  When we hit the road, within 30 minutes, we went back an hour, which is nice for traveling.  We found a couple of geocaches here and there until we hit Cheyenne. 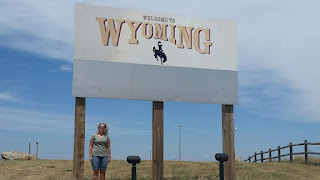 We arrived in Cheyenne around 11am.  We stopped to get a geocache which happened to be right next to the Sierra Post Trading Outlet Retail Store.  We wondered around inside to see if there were any deals, but we both knew that there wasn't any room in the vehicle.  They had to this cool section called "thirds" which was the extreme clearance section.  A majority of the items that were in this section were returned items.  They either had a slight defect or were washed by the previous owner.  They had a lot of shoes, but none in my size.  I feel like this store could be a hit-or-miss store, and it was a miss today. 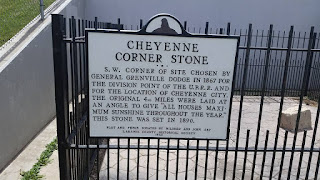 We worked up an appetite and drove downtown to see what kind of grub we could get.  Cheyenne's downtown was not intimidating at all, unlike Omaha.  We found this restaurant called "2 Doors Down" which was a hamburger joint.  The food was delicious and really hit the spot.  After lunch, we roamed around for another hour finding some geocaches and checking out some of the city's history.

We finally hit the road towards Denver.  Our first stop was a huge liquor store called "Daveco Liquors."  Our host the night before told us that it was something to check out.  So, we did, and it was huge!  It was about the size of a grocery store...maybe even bigger!  They had aisles and aisles of all types of liquors.  The whole back wall was nothing but beer coolers and was categorized by location (Colorado beer, Mexican beer, German beer, etc.).  We stopped at the Colorado craft beer section to check out their prices.  A guy approached and told us what we had to get.  He was a brewmaster himself and recommended Odell Brew beer.  We ended up buying a 6-pack and went back on the road. 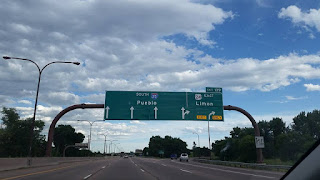 We arrived at Denver around 3:30pm, and it was a mess!  The traffic was terrible, and there was construction.  We pulled off and grabbed a geocache, and went back on the interstate.  We finally got through it, and even traffic in Colorado Springs was bad!  We continued our way until we arrived in Pueblo.  We found another geocache then at dinner at a Mexican restaurant.  It was around 7pm, and we made our way to the next Airbnb.  Our host lived 25 miles away from Pueblo in a small community in a valley.  The valley was gorgeous as it was protected by mountains.  We arrived at the b&b and was greeted by our host, Alan.  He showed us the b&b suite, which was pretty cozy.  We didn't chat for long since he had to be up at 5am for his shift-- he is a public transit driver for Pueblo.  We made ourselves at home and even slept in a little bit since we had an easy day ahead of us.

Only one more day until we arrive in Flagstaff.

Stay tuned for the final part!