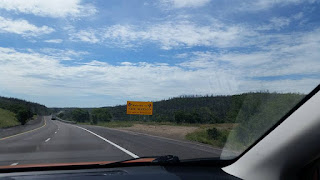 We had another good night's rest and even slept in a little bit before hitting the road once again.  We left Pueblo around 8:30am and drove south towards New Mexico.  We stopped in Trinidad to use the restroom and get a couple of geocaches.  Before we knew it, we were in New Mexico.  Our objective was to get to Santa Fe and hang out for a little bit.

We stopped here and there to stretch the legs and to find some geocaches.  We arrived in Santa Fe around lunch time.  It wasn't a huge city, but there was some stress over finding a parking place.  We went to the lot that said "public parking" and parked there.  Of course, it wasn't free, so we had to pay a couple of bucks for a pass.  We walked over to Upper Crust Pizza and ordered one of their specialties.  It was pretty good, then we walked over to the Travel Bug Cafe because there is a virtual geocache there. 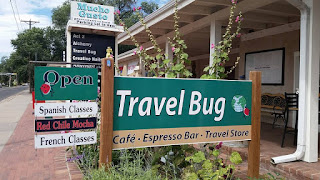 We walked over and completed the requirements to log the cache.  We walked inside the Travel Bug Cafe and couldn't believe our eyes!  There were maps, travel books, and guide books all over the walls.  There were inflatable globes hanging for the ceiling.  They had a small section to purchase travel gear, and they had a small cafe where you can purchase bakery goods, coffee, tea, or fruit smoothies.  We chatted with one of the employees, and he showed us this detailed topo map of Arizona.  It is a $120 map, they were trying to sell it for $50, and he told us that he would sell it to us for $15.  Brandon took it to the car, and couldn't get it to fit (the car was slammed packed!).  We told him to save it for someone else traveling through.  There were a lot of people that came in all at once.  Lots of older couples trying to find a specific book and singles walking in grabbing a drink.  There were already about 3 people in the store sitting at one of the tables thumbing through some travel guides.  We spent maybe an hour in the store looking around and talking with the guy.  We finally grabbed some fruit smoothies to-go and got back on the road.

By this time, we are getting close to 5 o'clock traffic in Albuquerque.  We made it through smoothly and continued our way to Arizona.

It began to rain while driving through New Mexico, which was the first rain we hit while on our roadtrip. 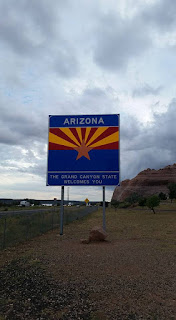 It was finally 7pm MDT, and we had originally talked about staying the night in Gallup, NM or driving another hour and a half to Holbrook, AZ to crash.  We still had energy since we weren't driving a lot today, and decided to make it to Flagstaff.

We arrived at the Arizona Welcome Center and walked around and snapped some photos of the Arizona sign.  We continued through the very boring section of Arizona.  We passed the painted desert and Winslow, but both of those attractions aren't far from where we live. 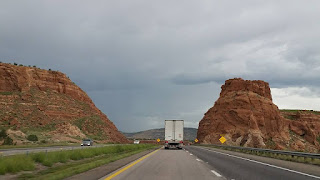 In addition, we went back an hour since Arizona doesn't observe Daylight Savings Time.  As we approached Flagstaff, and it started to pour.  We eventually took the first exit where we saw 5 hotels.  We ran into 3 of them, and they were all booked full, and one of them wanted $170 for one night!  Brandon called a Quality Inn and said that they had a room for $120...

So we drove down to the next exit and found the Quality Inn.  It was on top of a hill.  They had a huge lit sign on top of the hill, and the "Inn" was flickering. We drove up the drive way in the rain towards the flickering Inn sign.  We felt like we were going to a haunted house!

I said to Brandon, "Are we this cheap?!"

We parked in the lot and ran inside the lobby.  The clerk told us that she would give us a room for $99, which was still expensive (all of the b&bs were cheaper than that!), but we really needed a place to sleep for the evening.

The hotel was clean and neat, just had a creepy vibe on the outside.  We would leave early in the morning to go to a geocaching meeting, then to the apartment complex to finish up some paper work, then to the UHaul place to pick up our U-Box and start unpacking!

Overall, we had a great road trip.  We saw some interesting things and had a nice time just relaxing before our move-in day.
Posted by Unknown at 10:43 AM