The ultimate roadtrip Part I:

We left Gainesville bright and early at 11am.  Okay, definitely not bright or early, but we did end up leaving later than we wanted.  We drove on over to Canton to jump on I-75 North, and ended up eating lunch at Which Wich,
a sandwich restaurant.  This was our first time eating at this establishment, and it did not disappoint.  After lunch, we finally headed north, only to get in a lot of traffic.  We noticed there were several people standing on overpasses with American flags all along I75.  We honestly had no idea why.  Once we finally got out of Georgia, we began our stretch to Murfreesboro, only to be greeted with a DOT sign saying "find alternative route."  I quickly went on Google Maps and found an alternative route; it looked like out initial route was delayed due to construction.  We arrived in Murfreesboro, filled up with gas, found a few geocaches, and went our merry way West towards Jackson.  We finally arrived in the area and grabbed a few geocaches before our final destination for this part. 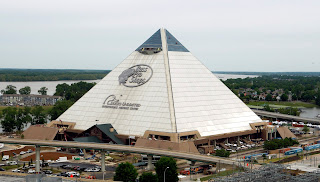 We arrived in Memphis at dinner time, 6pm CST.  We stayed with my grandma for the night and the following day.  We explored the new Bass Pro Store that's downtown.  Memphis is pretty much a mess right now-- they have a lot of construction going on on I40 and I240.

We would have loved to stay longer, but our trip was ready to begin.