Part 3: A weekend in Vienna

On Saturday, Brandon and I left the hotel at 5:15am to catch our 6:15am bus to Vienna.  We walked to the metro and bought our tickets, and caught the train to the stop where our bus was going to be.  When we got off the metro, a Dutch guy asked if we were catching a bus.  We told him yes and followed the signs for the bus transport depot.  We looked all over for our bus, but didn't see the right one.  Then, a group of 4, probably in the early 20s, asked us if we were riding a "Student Agency" Bus.  We told them that we were but didn't see the bus.  It was 5 minutes until the bus was scheduled to leave, and then we saw the yellow bus parked in the distance.  We ran over to the bus, which was the one that we needed.  The attendant was rude because we were late, but we only made the bus leave 5 minutes late.  Anyways, the bus was really nice.  The seats were big and comfortable, we had individual tv screens with movies, games, internet, and tv shows.  We also were offered a free hot beverage, and there were other snacks for sale.  After 2 hours, we arrived in Bratislava were we caught our connecting bus to Vienna.  The attendant was a lot more pleasant.  We were on the rode for maybe an hour, and then we arrived in Vienna.

When we arrived, Brandon and I were hungry.  There was a mall near the bus drop off, so we ate some pizza.  After we had some lunch, we contemplated if we wanted to walk to the Airbnb or ride the bus.  We decided to buy 48 hour transportation passes, and caught the metro.  We were still an hour early for check in, so we went to Stadtpark and relaxed in the nice weather.  We then went over to the Airbnb, which was located near the Hundertwasser Haus.  Our host, Peter, met us at the flat.  We was very nice and gave us a map and recommendations for our stay in Vienna.  Brandon and I unloaded and relaxed for a little bit.  Then, we left to go see the Schloss Belvedere.  The palace was very nice.  We walked around the garden and took some photos.  Once we were satisfied, we went back to the flat.  We used the internet to find a place to eat, but everything was closed.  So, we ended up eating at McDonald's since Brandon has never had Micky D's outside of the US.  I got the McRoyale which was delicious!  The fries were even different than the ones served in the US.  After dinner, we went back to the flat and passed out.  It was a long day for us since we were awake so early! 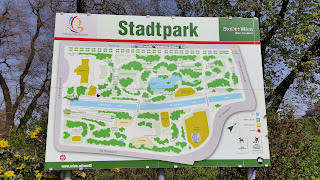 Day 2 in Vienna: We started our day a little late...around 10 am.  Brandon and I had a geocaching event scheduled for noon at Stadtpark.  We made our way to center and grabbed some baked goods at Josef Brot.  We got chocolate filled croissants!  We started making our way to the park to be early for our event, but Brandon was still hungry.  So, we went to a brat stand that is open from 8am until 4am.  He got a huge brat and was satisfied.  We eventually made it to our geocaching event, where almost 40 people showed up.  It was nice chatting with the locals and there were some visitors there as well.  After 45 minutes, we decided to catch the Tram 1 and ride it around the inner district to see the beautiful buildings.

Of course, we jumped on the Tram 2 to connect to the Tram 1, but the Tram 1 never came!  We didn't want to waste our time, so we walked to the metro and catch the train to go to Schloss Schonbrunn for a little bit.  We arrived at the palace around 1pm.  We walked around the outside and the garden, and then we made out way up the hill to see The Gloriette at the palace.  It was a steep climb, and we sat on the grass to enjoy the view.  We both were a little hungry, so we walked back to the metro and went back to the Stadtpark where we ate at the Biergarten.

Since we were in Vienna, Brandon had to get the Wiener schnitzel.  I went the cheap option and got the schwiene schnitzel.  The food was good and the beer was alright.  After lunch, we finally got on the tram 1 to see the city, but got off to walk around s
ince it was better.  We walked all around the inner district and took lots of photos.  When we stopped to look at this map, this guy who works for the opera tried to get us to buy opera tickets.  Although it sounds nice, we didn't have the money or time to see the performance.  The guy then was a jerk and stormed off.  Whoops!

We finally jumped back on the Tram 1 and rode it for 45 minutes and went back to the Airbnb.  We talked to our hosts for a little bit, but I went to bed early.  We walked a lot and saw a lot!  We only stopped at one souvenir shop because we were so busy.  Next, we will wake up early to catch the bus to Prague! Stay Tuned!